Hard is it to be born a man; hard is the life of mortals. Hard is it to gain the opportunity of hearing the Sublime Truth, and hard to encounter is the arising of the Buddhas. ~ Dhammapada 182 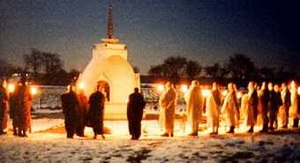 Organised Theravada activity in the UK may be separated into two distinct strands with areas of overlap. There were the ethnic viharas by the Thais, Burmese and Sri Lankans and to a lesser extent Indian followers of Dr. Ambedkar, and a native western one.

The Sri Lankans were very vigorous with eminent dhammaduta monks residing in the UK for long periods of time. Among the first of these were the indefatigable Ven. Narada who lectured extensively in 1949, leading to the opening of the London Buddhist Vihara in Knightsbridge, in 1954. In 1957, the distinguished scholar, Ven. Dr Saddhatissa replaced him and remained in London until his decease in 1990. During his tenure, the vihara moved to its present premise in Chiswick. Ven. Saddhatissa lectured widely, not only in the UK but also in Europe, and the USA, besides writing, editing and translating numerous works. Presently the head of the vihara is another notable scholar, the Ven.Vajiragnana.

The Thais established the Buddhapadipa temple with government funding in 1966. The first incumbent was an energetic bhikkhu the Ven. Sobhana Dhammasudhi. He soon gathered around him a number of enthusiastic western converts. However, in 1971, he left the monkhood, adopted the name Dhiravamsa and eventually left for the USA where he continues to teach meditation. In 1975 Buddhapadipa vihara moved to a beautiful house located in four-acre grounds in Wimbledon.

The Burmese opened their first vihara much later in 1978 in Birmingham. It’s senior incumbent, the Ven. Dr. Rewata Dhamma is a remarkable bhikkhu who is not only a scholar of Theravada and Mahayana but is also proficient as a meditation instructor and in dhammaduta. He trained with the Indian teacher SN Goenka and was appointed by Mahasi Sayadaw as a teacher. He conducts regular retreats in the UK as well as in several countries in Europe. Other Burmese viharas include the Tisarana Vihara with the respected Ven. U Nyanika as abbot and the London Burmese Vihara. In recent years, followers of the Mahasi Sayadaw tradition has established a vihara cum meditation centre in the village of Billinge in Lancashire.

And of course the British

The native British sangha had a more difficult start. One of the earliest first British bhikkhus was Allan Bennet who was inspired by Buddhism after reading Sir Edwin Arnold’s epic poem “The Light of Asia”. He ordained as a bhikkhu in Myanmar in1902 and led a mission to England in 1908. However, after six months, he returned to Myanmar. In 1914, he disrobed on account of ill-health and returned to the UK where he continued in his dhammaduta work. Osbert Moore also discovered Buddhism from a book while serving in the army in Italy. He left for Sri Lanka after the war, ordained in 1950 as bhikkhu Nyanamoli and trained under Ven. Nyanatiloka at the Island Hermitage. Before his premature death, he translated the Visuddhimagga and most of the suttas in the Majhima Nikaya. Another ex-soldier, Lawrence Mills was ordained as a samanera by Ven. Saddhatissa in the UK. He then went to India to teach Ambedkar’s Buddhist converts and then to Thailand where he received bhikkhu ordination as Ven. Khantipalo. After 11 years in Thailand he went to Australia where he helped establish Wat Buddharangsee and later Wat Buddha-Dhamma in New South Wales. He wrote several books but later disrobed to practise Dzogchen, a technique of meditation of Tibetan Buddhism. 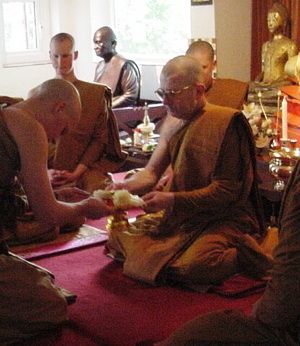 It was William Purfurst who was most determined to set up an English sangha. He came into contact with Buddhism through the Burmese monk Sayadaw U Thittila who like him, was serving in the volunteer services in London during the Second World War. Receiving permission from his wife, he left for Thailand and on Vesak 1954, ordained under the famous abbot of Wat Paknam as the Ven. Kapilavuddho. Apparently a gifted student, he was authorised to return to the UK later in the same year to teach. Residing in the Sri Lankan vihara in Chiswick, he set up the English Sangha Trust in 1955 which has as its objective, the establishment of a native bhikkhu sangha. Later that year he went to Thailand with three samaneras who after receiving bhikkhu ordination in 1956 returned to the UK. However, in the following year, due to increasingly weak health, he was compelled to disrobe. In the following years, two of the other bhikkhus also disrobed leaving only the Ven Pannavuddho. The Ven. Pannavuddho also left for Thailand and has remained there, living with the famous Ajahn Maha Boowa in his monastery in N.E. Thailand. Thus, the Ven. is presently the senior-most British bhikkhu. In 1967, after a period of ten years, Ven Kapilavuddho ordained again and burst onto the scene, taking over a vihara in Hampstead, building, teaching and even ordaining a few samaneras. However, this was short-lived. Again as a result of ill-health, he disrobed and died in 1971. One of the samaneras he ordained and who later disrobed was Alan James who continued to teach, and later set up his own Buddhist organization Aukana with meditation centers and live-in communities in Wiltshire. 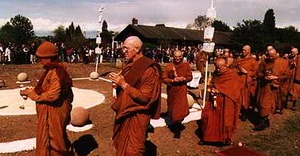 On the invitation of the English Sangha Trust, Ajahn Maha Boowa and his pupil Ven. Pannavuddho visited the UK in 1974, an event that left a deep impression on those that met them. Two years later an American bhikkhu, Ajahn Sumedho (Robert Jackman) stopped over in London on his way back to Thailand after visiting his parents in the United States. Ajahn Sumedho was a disciple of the Ajahn Chah, a deeply respected Thai master who, for several years, had been training western bhikkhus at his monastery in N.E. Thailand. While in London, he met the Chairman of the English Sangha Trust who then later decided to travel to N.E.Thailand. His purpose was to meet the two Thai masters to request that bhikkhus be sent to the UK. In response, Ajahn Chah decided to visit the UK in 1977 accompanied by four of his western disciples, including Ajahn Sumedho and the British Ajahn Khemadhammo (Alan Adams). When Ajahn Chah later returned to Thailand, these western bhikkhus stayed on in the UK in the vihara in Hampstead. 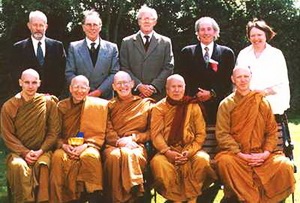 Ajahn Sumedho soon proved to be an exceptional leader with noble qualities that endeared him to a vast following of lay disciples and inspired many to take on the robe. One morning, when he was walking on alms round, he encountered a lone jogger who, intrigued by the sight of a bhikkhu, stopped him for a conversation. Subsequently he attended a ten-day retreat led by Ajahn Sumedho and later made a gift of an entire forest covering 108 acres in West Sussex to the British sangha. With the purchase of a nearby house in 1979, Cittaviveka Forest Monastery was established. A neighboring cottage was bought in 1981 to house the nuns. The new British sangha grew vigorously with bhikkhu ordinations held almost every year. With the increase in the number of bhikkhus, branch monasteries were then established in Harnham near the Scottish border in 1981, in Devon in 1983, and Amaravati a vast complex north of London in 1984. In subsequent years, associated monasteries were established in Switzerland, Italy, New Zealand and the USA. In the meantime Ajahn Khemadhammo founded a vihara, initially on the Isle of Wight and in 1985, he moved to the newly established Forest Hermitage at Warwick in the heart of England.