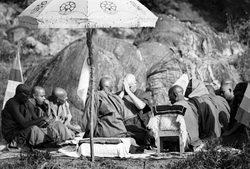 A collection of links on personal reflections on life as a Theravada Buddhist monk.

Experiences on ordination and the monk’s life

Procedure for Ordination as a monk