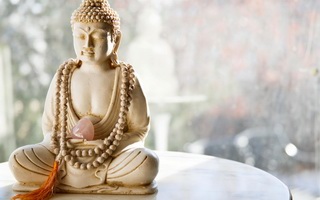 Buddhism is a religion which originated in India over 2,500 years ago with the enlightenment of Siddhattha under the Bodhi Tree. Henceforth he was known as the Buddha. His enlightenment consisted of the most profound and all embracing insight into the meaning of life, the very nature of mind and universe. This enlightenment was not a revelation from some divine being, but a discovery made by himself and based on the deepest level of meditation and the clearest experience of mind. It meant that he was no longer subject to craving, anger and delusion, and that he had attained the complete ending of all forms of personal suffering.

Having realized Perfect Enlightenment himself, the Buddha spent the next 45 years teaching a Path which, when followed, will take anyone, man or woman, to that same Enlightenment. The Teachings about this Path are called the Dhamma. In essence, the Dhamma consists of the Four Noble Truths; The Noble Truth of suffering, the cause of this suffering, the end of this suffering and the way leading to the complete ending of suffering. The Dhamma, the Teachings of the Buddha, extends to many, many volumes.

The Buddhist way is a gradual training in virtue, meditation (calmness of mind), wisdom and compassion. Belief has a place, but only at the beginning and it is always to be questioned, challenged and investigated until this makeshift and uncertain belief becomes transformed into a Truth directly seen in one’s own immediate experience.

Questioning and clear thinking, study and practice, and honest reflection on one’s personal experience are thus all encouraged in Buddhism.

From such intelligent use of the mind, a Buddhist develops virtue. For most Buddhists, this virtue consists of practicing generosity and compassion and keeping the five moral precepts; refraining from killing, stealing, adultery, lying and the use of intoxicants such as alcohol or illegal drugs. Based on this virtue, one develops the mind in silence, mindfulness, clarity and purity – which is the practice of Buddhist meditation. Then from such pure, clear and powerful states of mind, clear insight arises, a great wisdom which brings with it the ultimate peace and unlimited compassion. This then is the origin, the way, and the goal of Buddhism.