When, after a long absence, a man safely returns home from afar, his relatives, his friends and well-wishers welcome him home on arrival. As kinsmen welcome a dear one on arrival, even so his own good deeds will welcome the doer of good who has gone from this world to the next. ~ Dhammapada 219, 220.

Lumbini, the birthplace of Buddhism lies on the southern borders of Nepal. When Buddhism began to die out in India in the thirteenth century, many Indian monks settled in the Kathmandu valley. However as Hinduism gradually supplanted Buddhism in India, so too in Nepal Buddhism syncretised into Hinduism and lost its identity although some remnants in the Vajrayana form persisted.

Lal Kaji was born into a Sakya family in 1919, in the town of Tansen, fifty miles north of Lumbini. There were no Theravada monks in the whole of Nepal at that time. The only monks were those seen on murals in the temples. Orphaned at ten, he was raised by his uncle but often ran away from home. He took to smoking marijuana, a common practice of old men and sadhus and often ran away from home. His uncle, in an effort to tame him got him married when he was fourteen. However, he continued in his wandering ways. On one such adventure he found himself in Kusinara and there, Lal Kaji saw a monk for the first time. He was very impressed by the sight and thus, before the image of the Parinibbana Buddha he vowed that he would become a bhikkhu one day. 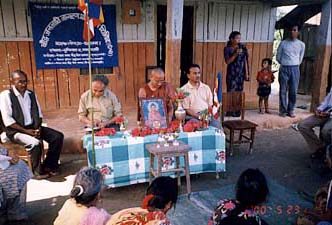 Despite initial objections from his guardians, he was finally ordained in 1936 at the age of eighteen as a samanera with the name Amritananda by the Burmese bhikkhu Ven. Chandramani Mahathera. Soon after, he went to stay and to learn Pali with another Newari bhikkhu, the Ven. Mahapragya in Kalimpong in the hilly Darjeeling district in North East India. Ven Mahapragya was born into a Hindu family but was ordained as a lama in Tibet. However, the Rana authorities in power in Nepal at that time had implemented a law prohibiting conversion from one religion to another and he was expelled to India. There, he reordained as a Theravada bhikkhu. Eventually both of them decided to return to eastern Nepal. However, Ven Mahapragya was discovered by the authorities and arrested. As Ven Amritananda refused to leave his teacher,they were both jailed for four months before being escorted back to India. Following this incident, the samanera Amritananda then went to Myanmar and then to Sri Lanka where he took bhikkhu ordination in the year 1940 under Ven. Vajiranana Mahathera of Vajiraramaya, Colombo. Here he further deepened his studies in Pali.

He returned to Nepal in 1942, a time of political troubles in the country. At that time there were a few other monks living quietly in Kathmandu. There was no propagation of the Dhamma in public. In these circumstances, Ven. Amritananda began to preach the word of the Buddha every morning for a month at Swayambhu Hill. At the end of the month he held a night-long chanting of the suttas. The occasions were extremely successful, and those who heard his sermons were greatly impressed. The nightly talks drew large crowds; many of them taking the three refuges and the five precepts. He also began to travel from one village to another to teach. Other monks also began to teach in Nepal. In 1943, the first Nepalese Theravada vihara named Ananda Kuti was established on Swayambhu Hill by the Ven Dhammaloka Thera. Just as things began to look brighter, in the following year, a Nepalese bhikkhu tried to ordain a lady as a nun. The Rana government, learning of the incident summoned all the eight monks in Kathmandu at that time and asked them to cease preaching or leave Nepal. They chose to leave. At that time, Ven. Amritananda happened to be in Sarnath where he met these eight monks. There, they founded the Nepalese Buddhist Association or Dharmodaya Sabha which started a campaign requesting foreign governments to support their cause.

In 1946, Ven. Amritananda returned to Nepal with the Ven. Narada Mahathera, the famous Sri Lankan dhammaduta bhikkhu. He obtained permission to preach again at Ananda Kuti. He also succeeded in persuading the Prime Minister to allow the return of the exiled Ven Dhammaloka and later, other Nepalese monks. The Ven. Narada returned to Nepal in 1947 with a sapling of the Bodhi Tree and the relics of the Buddha which was enshrined in the stupa at Ananda Kuti. The Ven Narada visited Nepal for the third time in 1948 to inaugurate a new stupa. During this time he also managed to persuade the government to make Vesak a public holiday in the Kathmandu valley. The Rana regime was overthrown in 1951 and the King Tribhuvan Bir Bikram Shah who headed the new government was more sympathetic to the Buddhist s. In this year the All-Nepal Bhikkhu Sangha was founded and the King personally attended a ceremony at the airport to receive the relics of the Buddha’s foremost disciples the Vens. Moggallana and Sariputta from the MahaBodhi Society of Calcutta. On the occasion of the king’s birthday, suttas were chanted in the palace. Since then, this has become an annual occasion and succeeding kings had shown a close interest in the welfare of Nepal’s Buddhist subjects.

In 1956 and again in 1986 the World Fellowship of Buddhists held its conference in Kathmandu. As at 1988, there were 60 Theravada monks and 70 nuns staying in more than 30 viharas concentrated in the Kathmandu valley, with a few others in Pokhara and Lumbini. Presently, there are several active Theravada organizations teaching the Dhamma and training monks. One such organization is the Vishwa Shanti Bauddha Shikshalaya (World Peace Buddhist School) for monks, founded in 1997 by bhikkhu Jnanapurnik Mahathera who had trained with Mahasi Sayadaw in Myanmar. Presently it has an enrolment of more than twenty novices.