Therefore, follow the Noble One, who is steadfast, wise, learned, dutiful and devout. One should follow only such a man, who is truly good and discerning, even as the moon follows the path of the stars. ~ Dhammapada 208 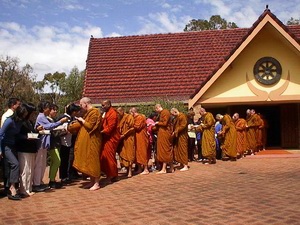 In the early 1950’s, inspired by the visit of the American born Buddhist nun, Sister Dhammadinna, the Buddhist Society of New South Wales was formed. This society is the oldest Buddhist organization extant in Australia. Its membership was and still is comprised mainly of people of Anglo-European ethnic background. However, for a long period since, the Dhamma was brought to Australia by Asian immigrants.

In May 1971, Ven. R. Somaloka, a Sri Lankan bhikkhu, arrived in Sydney to become the first permanent resident member of the sangha in Australia. He ministered mainly to Buddhists of European ethnic origin. In May, 1973, the Australian Buddhist Vihara was opened at Katoomba, in the Blue Mountains, west of Sydney. Sadly, the optimism which greeted the founding of Australia’s first Buddhist Vihara was short-lived. Many of the original supporters were unhappy with developments, withdrew from its activities and chose to attend the Thai temple or the Australian Buddhist Mission. However, recently the Vihara is beginning to regain supporters.

In 1975, a magnificent Victorian house, now known as Wat Buddharangsee, was purchased in the inner city suburb of Stanmore. Its establishment was in part, due to the pioneering work of an English monk, the Ven.Khantipalo. Wat Buddharangsee has proved to be one of the most popular Buddhist meeting places among Buddhists of all ethnic origins, in the true spirit of multiculturalism, in the Sydney area. Such has been its success that it has rapidly become too small to adequately serve its large congregation so, a large tract of land was purchased at Leumeah, south of Sydney, where a traditional Thai-style forest monastery, Wat PaBuddharangsee, was opened in May 1988. During this period several Thai styled temples were also established in the eastern states.

In 1987, Sydney’s small Burmese community rented a cottage at North Parramatta to serve as a temporary vihara as the first step towards establishing a permanent Burmese temple in the Sydney area. The Abbot, the Ven. Zagara Bhivamsa, took up residence there in January 1988. He is a highly respected teacher and scholar, being formerly a professor at Nalanda Buddhist Institute in India. In 1989, larger premises were purchased by the Burmese Buddhist Society at Merrylands, also in the Parramatta district from where it currently conducts its activities.

In the mid eighties, the Lao refugees welcomed the arrival of their first monks to serve the spiritual needs of their community. Because of inherited political differences inherited from their homeland, they have built two separate temples; Wat Dhammananaram and Wat Buddhalavarn. Despite support from the resident monks for a merger, this has not succeeded.

Also in the mid 1980’s, the Ven. Long Sakkhone, a Cambodian Buddhist monk arrived to take up residence in Sydney. The community initially rented a run down cottage in Fairfield, a suburb of Sydney, to serve as a temporary monk’s residence and temple. In 1990 their temple comprising a community hall, office and amenities block as well as a monk’s residence was officially opened.

June 1985 saw the arrival of Ven. Mahinda, a disciple of Ven. K. Sri Dhammananda in Kuala Lumpur, on a one month missionary lecture tour of the eastern States of Australia. Whilst here, he realized the fertile ground ready for cultivating the Dhamma. An application was lodged, prior to his return to Malaysia, for his permanent residence visa. This was granted and he returned in July 1986. He was appointed bhikkhu in charge of the Hock Cheng See Buddhist Vihara at Ambarvale, south of Sydney. This Vihara had previously been purchased by some monks from Malacca, Malaysia and the trustees had invited Ven.Mahinda to use it as his residence. The Ven Mahinda, assisted by the Singaporean nun Sister Sumitra, initiated the Australian Buddhist Mission which organizes meditation retreats and youth camps with participants from several ethnic groups including Australian born, Burmese, Cambodian, Malaysians, Sri Lankans and Vietnamese. 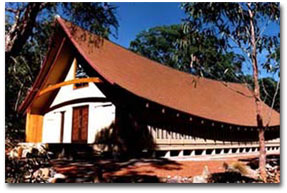 Theravada Buddhism in the eastern states was greatly popularized by the Ven Khantipalo ( Lawrence Mills )mentioned earlier. Ordained as a samanera by Ven. Saddhatissa in the UK, he then went to India to teach Ambedkar’s Buddhist converts and then to Thailand where he received bhikkhu ordination. After 11 years there, he came to Australia. Later, he also established Wat Buddha-Dhamma on land in the Dharug National park purchased and donated by his closest student the German lady, Ilse Ledermann (later ordained by Ven. Narada Thera as Ayya Khema) Ven. Khantipalo wrote several books but later disrobed to practice Dzogchen, a technique of meditation of Tibetan Buddhism. Like the Ven. Khantipalo, Ayya Khema also popularized Theravada by teaching extensively and holding retreats. Later she went to Sri Lanka and established Parappuduwa Nun’s Island, a retreat for the training of nuns, especially those of western origin. The Ven Pannavaro who trained in Myanmar for several years also returned in the early 90s and established the Buddha Dhamma Meditation Association with an associated meditation center in the Blue Mountains.

Among the several Buddhist organizations initiated by native born Australians, perhaps the most successful is the Buddhist Society of Western Australia. In 1982, at the society’s invitation, two Australian bhikkhus, Ven. Jagaro (John Cianciosi) and Ven. Puriso (Bruce Evans) arrived in Perth to start a monastery there. Both the bhikkhus were disciples of the Thai master Ajahn Chah of N.E.Thailand. In 1983, Ajahn Brahmavamso, (Peter Betts) an English bhikkhu also arrived from Thailand to assist in setting up the new forest monastery. Since then, Bodhinyana Monastery, set in 97 acres of bushland in Serpentine, 60 km south of Perth has become a model for a western forest monastery. To complement its dhammaduta activities, a splendid complex has also been purchased in a suburb of Perth to cater to the city folk. When Ajahn Jagaro disrobed in 1995, Ajahn Brahmavamso assumed the position of abbot. Since then, the monastic community has grown to reach its maximum capacity of twenty and plans to establish a branch, perhaps in the eastern states, are being considered. In 1998, the Society bought a 583 acre piece of natural bush-land with deep-forested valleys, granite outcrops, fresh water creeks, 45 km from Perth and progress is under way to establish a nun’s monastery, named Dhammasara Monastery. The nun’s monastery is the responsibility of the Australian ten-precept nun Ajahn Vayama who ordained in 1985 with Ayya Khema at Parappuduwa Nun’s Island. In the mid 90’s she lived in Amaravati in the UK and later at Wat Buddha Dhamma in New South Wales.